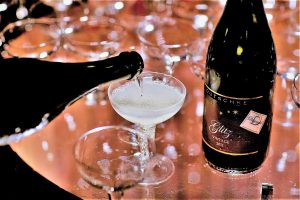 The harvest of 2011 was a little unusual as it was a damp one, with continuous showery weather across the picking season. Many winemakers in the Barossa Valley had never experienced one like it. Unfortunately, that year plenty of vineyards suffered from the wet and some blocks were not harvested at all. But pressure makes diamonds, and years on from a vintage that provided a few challenges, we’re seeing that the fruit we did take from the vines has made for some terrific wines.
We don’t often make white wine, but in 2011 we chose to make a Chardonnay from Ken and Helen Semmler’s 86 Block planting. Chardonnay ripens early, and lucky too, as it was picked before the wet weather set in later during March. Some of you may remember the 2011 86 Block Chardonnay, maybe even have a bottle or two left in the cellar. From this same parcel of Chardonnay, we also chose to make a Sparkling Chardonnay using the traditional Champagne method. That means fermenting in the bottle, ageing on yeast lees and allowing the flavour to develop over time.
See inside for a bit of a flow chart on how this is done!