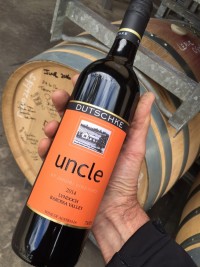 Do you remember the front page headline of our November 2013 Newsletter which read “WillowBend takes a break after 21 Vintages”? WillowBend was where we started. Our brand kicked off in 1990 as WillowBend, producing a Chardonnay and a red blend of Shiraz Cabernet and Merlot. Our last vintage of WillowBend Chardonnay was 1998. We continued to produce the red blend until our last in 2011.

We’ve missed not having our red blend around, but more importantly it seems that many of you too have missed it! Brenda and I have often pulled an old bottle of WillowBend from our rack and enjoyed a glass or two with dinner. It has always been a pleasure to see how the wine matures so well over time. So I guess it’s not too surprising to hear that we’ve decided to bring the blend back for the 2014 vintage, albeit under a different name. Rather than bring it back as WillowBend, we thought for fun we could call the wine “John Farnham” or more subtly “J. F. WillowBend”, because of its comeback, but instead we’ve chosen the more appropriate name of “Uncle”.

Uncle Ken and I kicked WillowBend Wines off in 1990 and the red wine produced was always a blend of the three varieties of Shiraz, Cabernet and Merlot. (Exceptfor the 95 vintage – while Ken wasn’t looking I produced a straight Shiraz). TheUncle blend uses the same three varieties as before and is also from the same patch of vineyard as we’ve used to produce the good ol’ WillowBend.